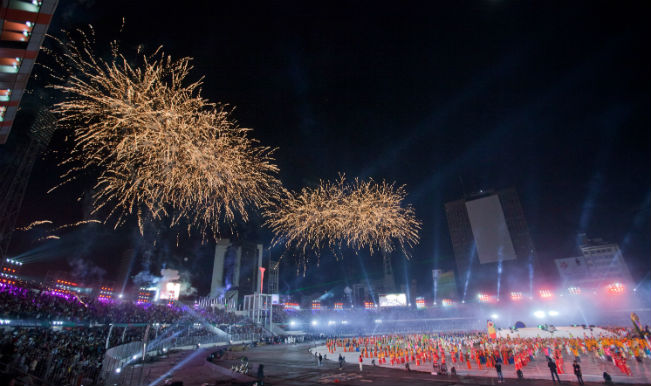 The 11th Cricket World Cup starts with a bang with the celebration of local culture, dance and music. The marvelous opening ceremonies held in Australia and New Zealand after 23 years. Thousands of cricket fans crowded the opening venues to see the stunning launch of the World Cup in New Zealand and Australia, the formal part of the ceremony began with a lone bagpiper and ended with a breath taking fireworks display.

The free event of opening ceremony held at Christchurch where enormous crowd welcomed the most anticipated cricket event of the year in a colorful community-focused event, which capped off by a spectacular fireworks display in the history of Christchurch.

The event started with big backyard cricket matches for children. A host of cricket stars, both past and present attended the ceremony at Hagley Park in the early evening to enjoy the carnival and musical atmosphere of the 2015 Cricket World Cup opening ceremony.

Thursday’s ceremony showed Christchurch’s resilience as it literally lifted itself from ruins to host the opening and opening match of cricket’s most anticipating event.

The opening match of Cricket World Cup 2015 will be played on between Sri Lanka and New Zealand at Hagley Oval, which is extensively redeveloped since to become the city’s international cricket venue soon after the earthquake wrecked Lancaster Park. Let us see who will shine and who will win the ICC Cricket World Cup 2015.