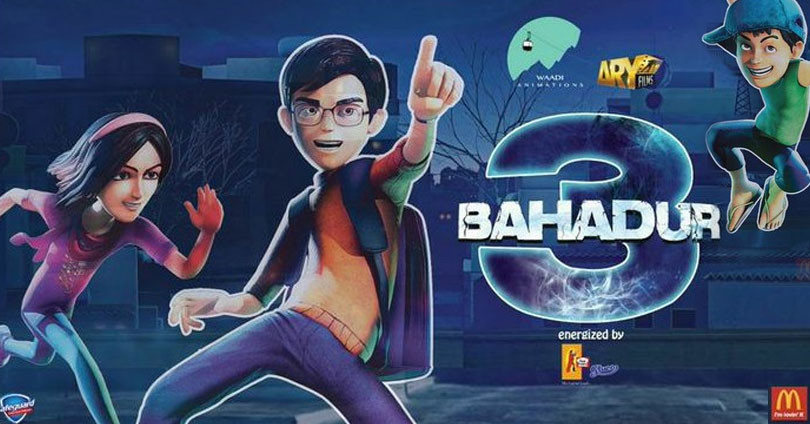 Teen Bahadur is the first animated movie of Pakistan and the second directorial venture of Academy Award Winner, Sharmeen Obaid Chinoy. Teen Bahadur will hit the screens in the summer 2015 and expected to grab attention of Pakistani moviegoers.

Teen Bahadur is a joint venture of ARY Films and SOC Films and a fully animated feature film, exclusively made for the children of Pakistan.

The story of Teen Bahadur revolves around three ambitious kids Amina, Kamil and Saadi with special qualities. Amina has the power of speed, Kamil has a good hearing sense and Saadi is amazing with math and physics. These courageous heroes fight the menace they feel is plaguing their society.

With 3D animation and use of modern technology, the movie has a very catchy sound track done one by the famous Pakistani pop singer and musician, Shiraz Uppal.

The talented Sharmeen is bringing this feature film especially for the brave children of Pakistan. It seems she is quite optimistic about her latest venture, as she stated recently:

“It’s time that Pakistani children have their own superheroes”

Sharmeen strongly believes that it is high time for our new generation to possess their own super heroes instead of inspiring Captain America, Superman or Avengers.

On the contrary, she is also planning to launch “Teen Bahadur Comic” soon.

Teen Bahadur is not just a movie, it is a beginning of a new era of using modern technology and latest trends in movie making. It is the right time to entice Pakistani moviegoers with animated projects and bring families and children to our cinemas.

Currently, Pakistan lacks in production facilities and talented production teams to execute epic ventures on big screen. 3 B is just a beginning of animated movies in Pakistan and will bring young audience in cinema houses.