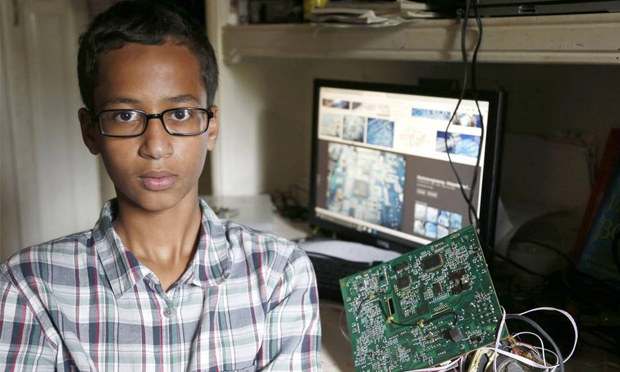 He was passionate he was innovative, what a supreme behavior he received for making a harmless clock. Social media has pop up a new trend #IStandWithAhmed. The media has played its part fully and unveiled whole story without letting anyone put allegation or surcharge on America for punishing talented teen for his innovation.

Ahmed was born in Texas in a family that has been migrated from Sudan. With the name of Mohamed and a Muslim religion, Ahmed was living in America where often Muslims known as terrorists. On Monday, 14-year-old apply autonomy lover Ahmed Mohamed was captured in Irving, Texas, for bringing a natively constructed radical clock into his new secondary school. He was bound and taken into teenage imprisonment for addressing in light of the fact that teachers and police suspected that the circuit barricade set must be a DIY bomb. Ahmed has subsequent to been discharged without any charges recorded, yet in the course of recent hours the Internet has been overflowed with backing for the teenage from all the greatest names in science, innovation, and governmental issues – including Barack Obama – who made it clear that they remain with Ahmed, and that youngsters shouldn’t feel frightened of being mistreated for doing science.

“He just wants to invent good things for mankind,” Mohamed said. “But because his name is Mohamed and because of Sept. 11, I think my son got mistreated.”

Being a Muslim country Pakistan should not take this arrest in a negative way. The president and other governing bodies of America not only apologized Ahmed but has also encouraged him for doing best effort. He has even been invited in white house to meet Obama and show his invention that took him to jail.

Pakistani nation often get neglected by America and mostly rejected in many terms. The positive point of this incident that every Pakistani should focus is America the super power and very well developed country encourage science, innovation, strategy, effort and struggle. America didn’t ashamed of accepting its mistake it works for humanity and consoles where it is needed. The reason behind the success of America is their regard and passion towards innovation and improvement of technology. Pakistan is standing in row of countries that designing technology and making human survival easy. Letting our nation feel good about innovations and boosting technology in Pakistan.