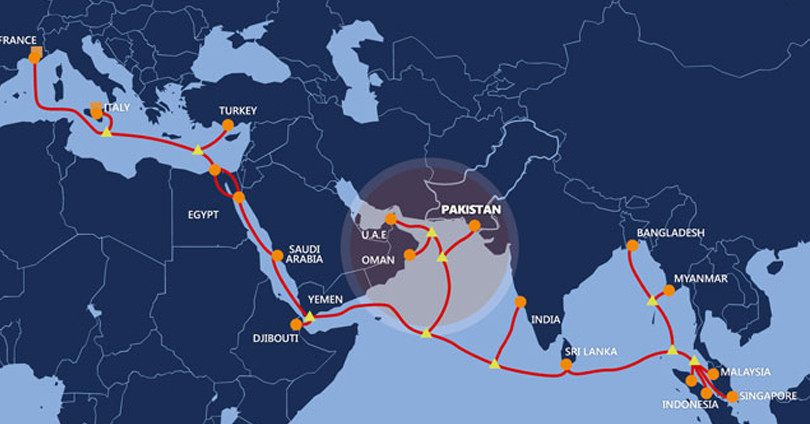 Trans World that owns and operates the largest technologically advanced cable landing station in Pakistan has joined a consortium of leading telecom companies to build and operate the SEA-ME-WE 5 submarine cable network.

The 20,000-kilometer submarine high-speed fiber optic cable expected to be ready for service by the second half of 2016. Trans World (TW) will own and operate Pakistan landing of SEA-ME-WE 5. Currently, Trans World owns TW1, which connects Pakistan to the rest of the world through a submarine cable.

According to details, leveraging 100 Gbps technology and a design capacity of at least 24 Tbps on 3-fiber pairs, SEA-ME-WE 5 is a multi-regional data spine that will facilitate the fastest delivery of broadband applications including video and contents to corporate enterprises and domestic consumers in Europe, the Middle East and Southeast Asian region.

Kamran Malik, the President of TW commented on this momentous occasion:

“As part of the SEA-ME-WE-5 consortium, TWA’s dream to bring the second submarine cable landing to Pakistan, as a private operator, is now a reality. We will be able to deliver resilient and redundant network solutions with several advantages such as flexibility and reliability for our customers. The system will offer an increased service experience and as TWA we are excited to be part of the SEA-ME WE-5 consortium.”

“This SMW5 investment by TWA is a result of positive and goal oriented policies which will enhance socio-economic development and spur the economic growth via a more connected Pakistan and TWA will continue to play a significant role in connecting businesses and people around the world. SEA-ME-WE 5 will be ready for service by mid of 2016.

The new 100G SEA-ME-WE 5 will deliver high-speed fastest broadband and connect millions of internet users and businesses with the rest of the world. It is high time for TW to take this huge step to curb the growing need of consumers and large scale enterprises operating in Pakistan.