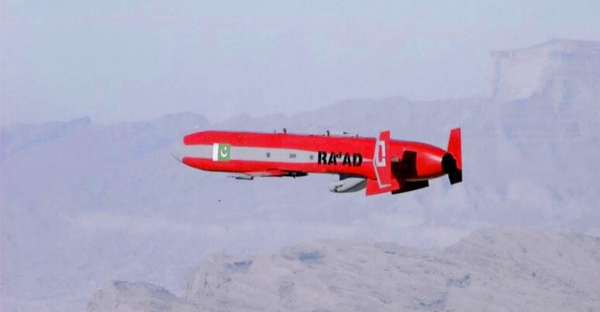 Pakistan successfully tested a cruise missile on Monday that is capable of carrying nuclear and conventional warhead. The missile was launched from some undefined place during an exercise conducted by the Strategic Forces Command. ISPR described the domestically developed “Ra’ad” as “low flying” terrain touching missile.

The successful test of the 350-kilometer range missile (Hatf VIII) was the sixth, since first tested in 2007. The missile is approximately 6 meters long and weight 1000 kg. The missile provides Pakistani defense forces an edge on land and at sea.

“Cruise Technology” is extremely complex and has been developed by only a few countries in the world. The state of the art Ra’ad Cruise Missile with Stealth Capabilities is a low altitude, terrain hugging missile with high maneuverability can deliver nuclear and conventional warheads with pin point accuracy.”

The test closely followed India’s 5000 kilometers nuclear-capable Agni-V missile. In addition, the Pakistani test gave the impression that Pakistan is in a better position to the Indian trial and aggression.

Indian media and defense sources are criticizing this missile test and relating with Pakistan’s possible reaction to Obama’s recent visit to India, where both leaders inked a civil nuclear deal to counter China and Russia’s growing influence in the region.

India has stepped up the development of missile defense systems in recent years and started an arms race in region, particularly with neighboring Pakistan, which also possesses nuclear weapons to defend its land from aggression.

India carried out 23 missile tests in 2014, while Pakistan tested only seven to maintain minimum deterrence. It proves that Pakistan is a peace-loving nation, although its troops are prepared to safeguard the security of the country and the main pursuit is to ensure maximum strategic stability in region.